It's the first episode of Railphile! Tag along as we briefly discuss our backgrounds and the half-baked plans for this podcast.

A lifelong railfan, I've spent most of his life in/around the Twin Cities of Minneapolis and St. Paul, MN. I've always had some model trains around; grew up with three rail O gauge, got involved with an N scale club in college, and with Lego obsessed kiddos, have sold off most of the N scale stuff and jumped into "L gauge" with both feet.

I started taking train photography seriously in college (circa 2005), and things have kind of snowballed from there. I'm a big fan of the CRPA conferences (I've missed a few years since kid showed up; I'll get back someday!), and have been fortunate to spend a good amount of time traveling and shooting trains. I spent a lot of time trackside in Oklahoma and Texas in college (I graduated from OU in 2008), and most of my traveling has been around the upper midwest since moving back home to Minnesota. Lou and I did a trip to Quebec's north coast last year, and I can't wait to go back.

In the world of foam, my most useful contribution has been the creation of Railfan Atlas, which overlays train pictures from Flickr on Google Maps. I'm super interested in Griswold crossing signals and railroad snowfighting. Photo-wise, I went through a prolonged phase of shooting ultrawide, though I've been on a hard dusk/night pan shot kick lately.

I'm a web developer by trade, and spend most of my time turning pictures of websites from a designer into actual websites. I live in Burnsville, MN with my wife, three kids, dog, and cat. I also groove on aviation, geography, weather, and politics. 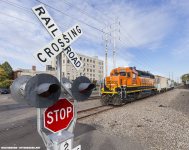 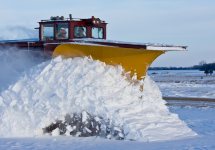 I've loved trains my entire life, probably longer, and have been taking photos of them since I was ten (I got a camera for my birthday. The photos are horrible.) Fast forward some decades later, and I've somehow bumbled my way into a career in railroad event photography, industrial commercial photo and lately, railroad marketing and event management. It's less sexy than it sounds most of the time, but sometimes it's unbelievably cool.

I sold cameras for a long time, so you'll hear some technical stuff from me from time to time, but what you'll more likely find yourself skipping through is all the talk about film- I love it. I spend a lot of time with my Hasselblad, and an increasing amount of time with my Fuji pano camera.

I try to travel as often as I can, which I think is true for all of us in this hobby. My foaming tastes run to the obscure side of things- I love the Iron Range of Minnesota, the LASL through the desert, the Côte-Nord of Quebec, and anywhere else you're likely to be the only guy taking a picture of the train. 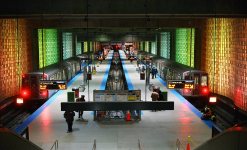 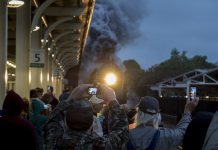 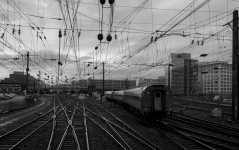